A lot came with the bitcoin bull market in 2021 which is referred to as the ‘Bitcoin Tourist’. These are investors who are driven by market gains and as the price rises, FOMO (fear of missing out) on digital assets starts. Now that the bear market has arrived, many things are happening. One of them is the exit of these bitcoin tourists from the market as losses are shaking up the space.

Activity on the bitcoin network has been on a downward trajectory after the initial uptick triggered by the market crash. However what happened after that is a reduction in the number of active addresses on the network after the ‘bank run’ as users scramble to sell to avoid further losses. Incidentally, most of the decline in active addresses has been recorded when network activity is returning to normal.

Related Reading | What will happen to bitcoin miners if the price keeps falling?

What this indicates is that the so called ‘paper hands’ are starting to exit the market. A report by Glassnode noted that the number of bitcoin active addresses on the 7-day moving average dropped 13% from its 1 million per day in November to 870,000 addresses per day in early July.

The number of active addresses peaked back in 2020, but maintained a reasonable level from 2021 to 2022. As such, the activity on the network is now very low. 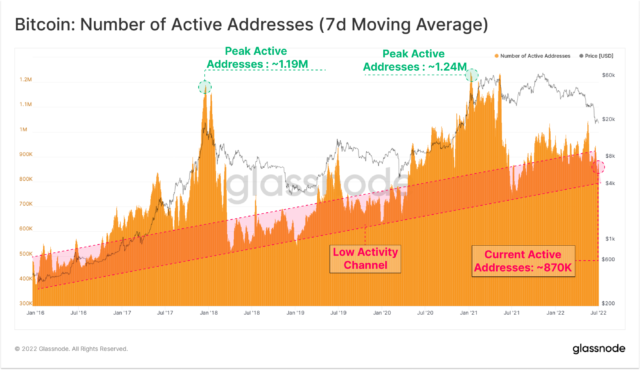 Now, in times of low activity, this shows that the ‘Bitcoin Tourists’ have exited the market and, at this point, those who are left are those with a high degree of conviction in the market. This has pushed the network towards a point where all speculative activity in the market is purged and proper balance is restored.

Bitcoin recovery on the horizon?

It’s hard to tell where the bitcoin price will end up in the short term, especially for the rest of the year. The purging of speculative investors and market tourists is a great thing, but it doesn’t mean that digital assets will recover anytime soon.

For example, even though Bitcoin has been able to recover above $20,000 in the past day, it continues to struggle to maintain this point and fight the bears at the $20,500 resistance level. Its slight recovery has not seen it retreat from any important technical levels as it is still trading well below its 50-day moving average.

The only thing one can expect from the market due to the purge is stability in sentiment. As such, volatility can be somewhat reduced when speculation is low. However, there is no clear indication that Bitcoin will soon record another bull rally.

If Bitcoin Price Drops Below $10K, This is What Traders Can Expect Next!