June has been a disastrous month for crypto investors. But despite this, we are seeing some correction as the major coins make a slight upward move. AVAX is no different, and the coin has now managed to reclaim an important support area after crashing in June. So, where will it go next? Is the rally short term or permanent? Here are some highlights: 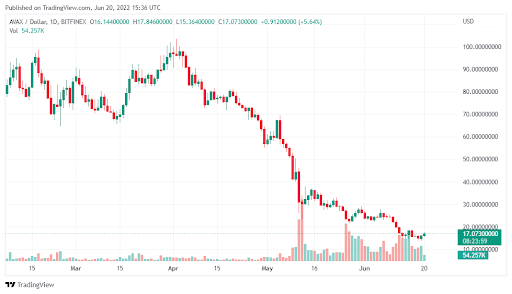 Where will the avalanche go from here?

Well, there are several scenarios at play here. Firstly, the rally we have seen by AVAX over the past two days corresponds to a broad correction in the market. This could suggest that perhaps we were seeing a short-term respite after the massive sell-off last week. If this is the case, AVAX could lose momentum rapidly.

The good news though is that the coin is now trading above the $14 mark. For the most part in 2022, this support has remained strong despite massive bear pressure. Hence, even if the coin retraces from its current 2-day rally, the bulls will have a better chance to defend the $14 mark compared to a week ago.

Why does AVAX still remain a major risk?

Despite a move above the $14 mark, we still see major risks with AVAX. Firstly, the coin has struggled to maintain the momentum above $20 over the past few weeks.

Therefore, we expect it to start losing momentum as it attempts towards $20. This could lead to a sharp pullback which eventually puts the $14 support in real danger.

Kevin O'Leary is Not Selling, Despite the Recent Crypto Collapse

100,000 Cubans Are Using Bitcoin In Response To U.S. Sanctions