Aave has had its ups and downs over the past two months. However, the price action has largely remained below $50 during this period. Aave also dropped significantly in early June. However, it has recovered and has now reclaimed several key support areas. Here are the highlights: 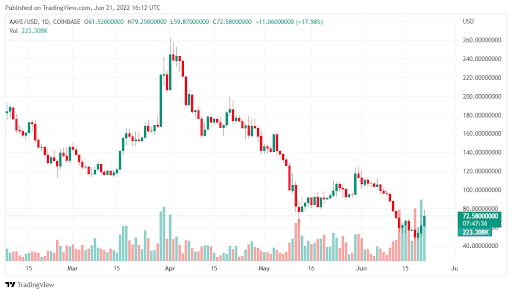 Why is Av’s momentum strong?

Although in general, the crypto market has rebounded, Away has just shot up. The total gain in the 7-day period is now up 17%, the highest among the top 50 cryptocurrencies. But there is a lot of room to move in a bullish breakout.

The coin is now trading above two important support areas. We expect this run to continue and eventually close above $80. After that, Aave will likely back off a bit. But it will not lose the support level of $60, at least not soon. The surge in Aave also comes in the backdrop of improving market conditions.

It seems that investors are now becoming convinced that the US Fed and other major central banks are serious about tackling inflation. But despite this, there are still many economic risks that can drive capital out of the crypto market.

For now, it looks like Aave is recouping some of the big losses it saw last week. However, the coin would need to break above $100 in order to erase the June collapse.

At the end of May, the AAVE was above $100. But the weakness in the market has put so much pressure on the DeFi token.

We don’t see it gaining $100 in the near term. In fact, the practical trading range will be between $60 and $80 in the coming few weeks.

Metabloxz Brings a Major Swedish Pharmacy Chain Into the Metaverse

Kraken Shuts Down its Headquarter in San Francisco